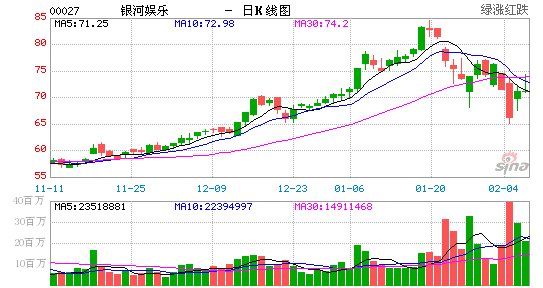 February 7, according to the Hong Kong Economic Times reported, Macau Betting After the recent performance of stocks, fight like a gambling table, on Wednesday opened a small shop, yesterday opened a shop two big shop. Later, the six main betting brand is still the winner, worth 17.8 billion yuan revenue.

For the market worried about slowing growth Lounge, a brand company's main sources, the first five days of strong February performance, "thanks to a large customer has finished, the majority has been re-buried early three sets."

Faba Mo Tong: has been adjusted so as to be buying two

Gaming stocks decline recently, from January betting revenue worse than expected, then the market worried about a slowdown in China's economic growth, strong growth Lounge business no longer be an card company's main message to the newspaper that its VIP Office operations in February the first five days of strong performance, the market need not worry too much about.

Sources, its VIP lounge on February first five days of the total number of transcoding (ie, the number of mud lounge guests return yards) of 30 billion yuan, with an average daily of 60 billion yuan, the number killed during the period (ie,Casino Winning numbers) amounted to 1.2 billion yuan, a net win rate (ie the ratio of the number of casino winnings and transcoding number) up to 4%. According to the information, the card company's main business lounge, last year the average daily number of about 4 billion transcoding and net win rate of about 3 percent. In other words, after the end of January was quiet, large passenger regression, alone the first five days of February the number of measure, representing an average increase of 50% last year.

Proposed this bargain hunting Macau betting stocks of BNP Paribas, the Asian betting research director Jin Dongxie middle finger in a report yesterday, January Gaming disappointing, only of seasonal factors, not structural changes, according to the bank is understood that in the Lunar During the leave, the strong midfielder business, have the opportunity at any time to refresh the record, and lounge business nor unusual trend.

However, Credit Suisse brokers were more cautious, concerned about a slowdown in China, will be a drag on the performance of the casino lounge business, investors should be wary of business more carefully Lounge Wynn (01128) and MGM (02282).

Muon, Chief Investment Officer of Robeco Chinese name, has seen a drop, remained optimistic about the gambling stocks, because the basic factors of good, considered to have the opportunity to make good sector bucked the trend. She noted that the overall market remained challenging in the first half, then Strategies to select the main sectors, with positive support plate also includes health care, dot com, environmental protection, solar energy and wind power stocks such.

"Last night (Thursday morning) we called to ask Europe and large passenger asked three o'clock, they say do not sell goods, but in a lot of Overnight (overnight) buying." An investment bank on betting stocks in human Wednesday plunge amazed.

It refers to an analyst, January data only adverse seasonality, market was overreacting. Selling pressure from unknown sources, plus the abnormal market reaction, there is a European-owned investment bank, who directed "by the recent case of multiple goods a lot. "

Indeed, since January 29, short positions Sands (01928) and GEG (00027) two gambling stocks have continued to increase, the amount of total short selling turnover ratio, from the time average of less than one percent in January, increasing ʱ??

In Sands, for example, until Wednesday, the day the stock price plummeted, on short-selling ratio doubled to 21.5 percent, while silver entertainment aspect, short selling rate increased more for five consecutive days, an increase of almost two percentage points per day. In the last five trading days dollars, Sands The total amount of short positions and GEG as high as 2.5 billion yuan.

There is a market analysis, there are two huge short positions behind ponder: First, betting stocks increase is too huge, and all those who hold stocks on hand are huge profits, one has any negative news appears, ready rushed profit; second, the eve of the Lunar New Year holidays Emerging markets divestment tide outbreak, Hong Kong stocks plunge with the potential, however, a strong bet stocks decline remains limited.

After days of accumulated short positions, the last straw on the camel's also happened to appear - Macau betting revenue worse than expected in January, became the stock price plunge fuse.

Some analysts, believes that profits are not necessarily rich, "love money too much betting stocks, but also just down the day the V-shaped rebound, you look GEG sharp rally in the afternoon, I believe that short positions are to surrender the disc."